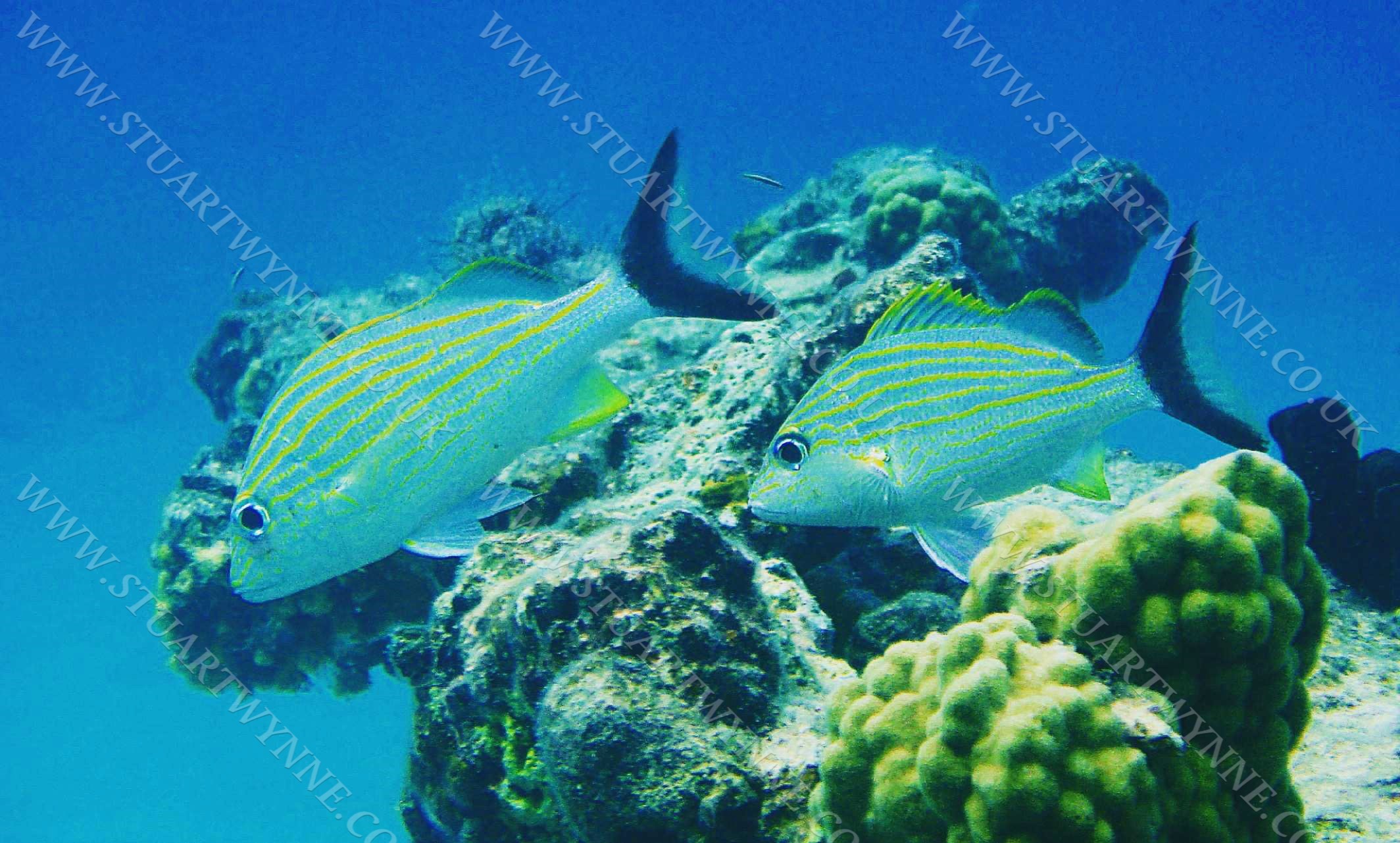 The Caesar Grunt (Haemulon carbonarium) is very similar in appearance to some other grunt species, namely Tomtates (Haemulon aurolineatum) and Latin Grunts (Haemulon steindachneri). It can however be distinguished quite easily if you pay attention to a couple of visual and behavioural ID cues. When schooling, the Caesar Grunt does not usually do so in very large groups, normally favouring only a one or two compañeros as in the featured image – Tomtates on the other hand often form huge schools containing hundreds of individuals. Caesar Grunts are also a lot more wary than other grunt species and do not often allow divers to make a close approach (so I was very honoured when taking this photograph!). In terms of visual ID cues, for me the most obvious feature is the dark/black caudal fin, the colour of which spreads up onto the anal and rear dorsal fins. both Tomtates and Latin Grunts only have a dark central blotch on the caudal fin……..as with all fish ID, to the untrained eye species can often look almost identical, but by combing visual ID cues with what the fish is doing or where the fish is doing it, this process can be made much easier!! For example, the Bluestriped Grunt is also very similar to the Caesar Grunt, with dusky tinges to both its anal and rear dorsal fins. However, in this case, the Bluestriped Grunt is unlikely even to be swimming around in pairs as it usually prefers to hang-out on its own (although to confuse matters it can sometimes be seen in schools!), but as confirmation it has what are usually very prominent blue stripes across its head and body, much more so than the Caesar Grunt. I hope I haven’t just confused you?! I promise it becomes second nature with practice!!

Originally posted on Instagram @sea_anguilla with the text: A pair of Ceasar Grunts swimming around an old coral head in Meads Bay. Grunts of all descriptions often hang around in large mixed groups, and at this time of year huge schools of juveniles can be seen hiding out near ledges and overhangs. A nice sight for a Saturday morning snorkel and a great way to start the weekend.