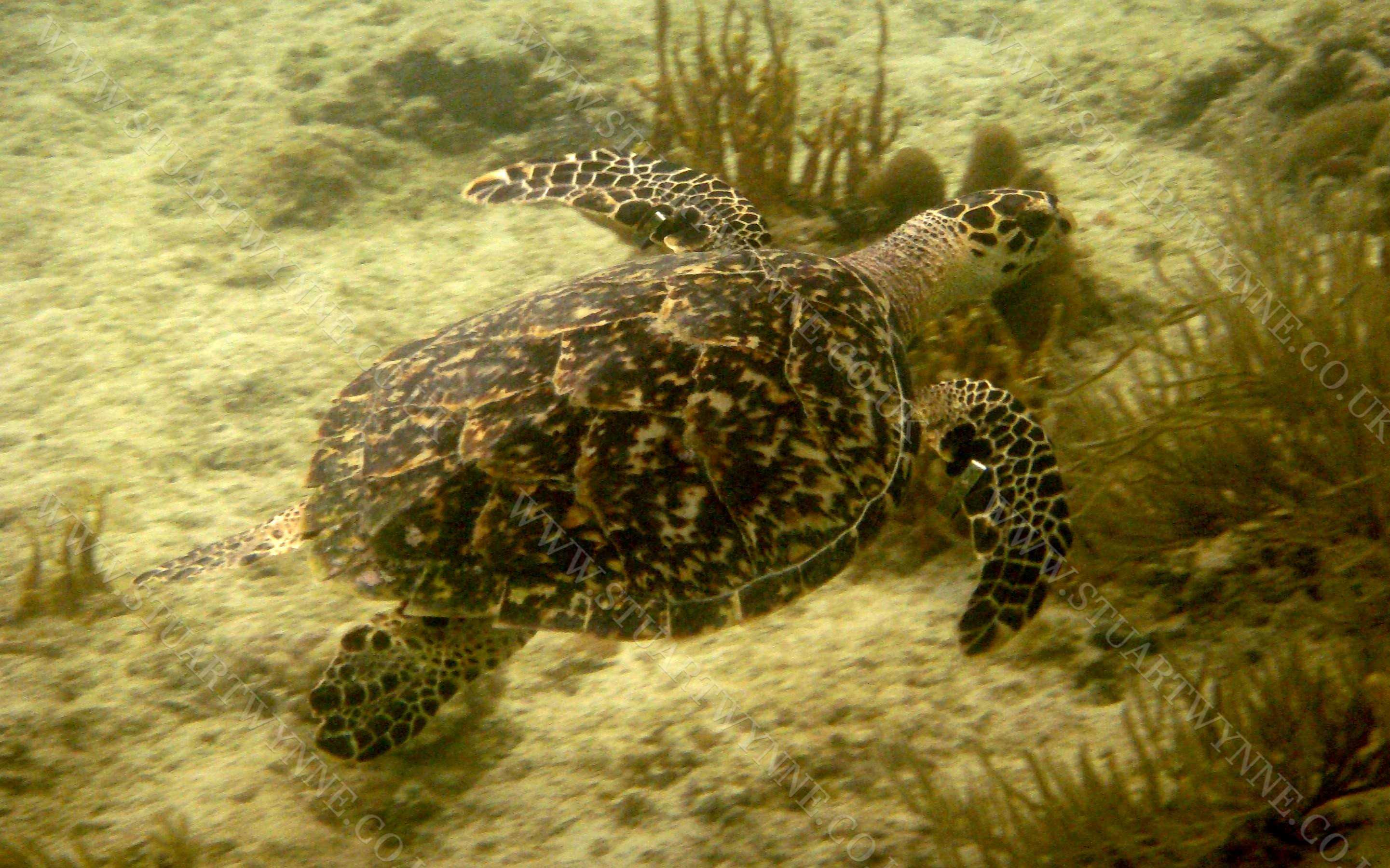 The Hawksbill Turtle. as with all sea turtle species, is a truely amazing creature: It hatches from an egg deposited by its mother sixty days earlier on a beach someplace; instintively knows to head down to the water and swim off into the open ocean; drifts around for a year or two  during a period known as the ‘lost years’ – beacuse nobody really knows for sure where they go (it is thought that floating sargassum is one of its favourite hangouts); ends up finding a nice shallow coastal area to spend its teenage years (as in the pictured individual who lives in the waters around Little Bay – interestingly for this whole time they have pretty small home ranges); once sexual maturity approaches their range increases and they end up migrating huge distances from the age of maybe 30 years and over, visiting beaches (if female) to deposit their own egg clutches and thus the circle is complete.

Quite an amazing life cycle! However, such an advernturous life can have its drawbacks. The Hawksbill Turtle is one of the rarer turtles, listed as critically endangered on the IUCN red list. All turtle species are threatened to one extent or another, and when one considers this amazing life cycle we can begin to understand why. At all stages it faces diffculties. Lets take a look in more detail:

Nesting – Beaches were once very calm and relaxed places, but these days humans spend a lot of time on them. Turtles nest at night to minimise the risk, but from time to time get it wrong and come up during the day. They are very sensitive to disturbances and may dump their eggs at sea if they cant find a quiet enough spot. Coastal development further threatens them, as does beach lighting. Once their eggs are laid, beach goers digging holes, putting up umbrellas or, worst of all, driving on the beach can further threaten their clutch. Use your imagination….the list goes on. To add another nasty spin to the story, baby turtle development is affected by temperature, where babies become males if in cooler sand (<82F) and females if in warmer sands (>89F). Nesting females choose sites appropriately, ideally picking a nice spot between these two temperatures shaded by shrubbery to hopefully give a good balance of males and females. Unfotuantely with the removal of beach vegetation for tourism this shade is often missing, which has lead to an over-production of females. It is apparently becoming harder and harder for a female to find a mate, and the number of unfertilized egg clutches is increasing. Not good.

Hatching – As mentioned, beach lighting is a big problem for turtles, and probably worst of all at the hatching stage. They use light as a cue, and flap off in the direction it is coming from. Without beach lighting this means they will head out to sea, as moon/star light will be reflected off its surface. However, a powerful resort spotlight or bar will outcompete with this and all the hatchlings inadvertanly head landward and die of exhaustion before ever reaching the sea. Sad.

Teenage Years – With a small home range and a need to go up to the surface for air, turtles at this stage are extremely vulnerable to hunting. Their high site fedility also means that to a casual observer their numbers seem artifically elevated, and give people a false sense of security. This would be especially the case for fishers who may think that there is no problem setting a net to catch a few turtles as there are loads of them about, not relaising that the net stands a chance of catching the entire local population in one go!

Nesting Years – Coming full circle, most of the issues at this life cycle stage have been mentioned above, but lets just conclude by saying, ‘No wonder turtles are threatened!’. This is especialluy the case for the Hawksbill Turtle, as they forage on soft corals and sponges, and with continued habitat degradation taking place globally they stand the chance of running low on food too. The poor Hawksbill Turtle. Will it ever be given a break?

Originally posted on Instagram @sea_anguilla with the text: Hawksbill Turtle foraging on the rocky shoreline in Little Bay Marine Park.This beautiful species of sea turtle is critically endangered, although luckily for visitors to Anguilla, it is relatively common to see one while snorkelling in rocky/reefy areas anywhere between North Cliffs and Flatcap Point. It is always a truly special encounter.