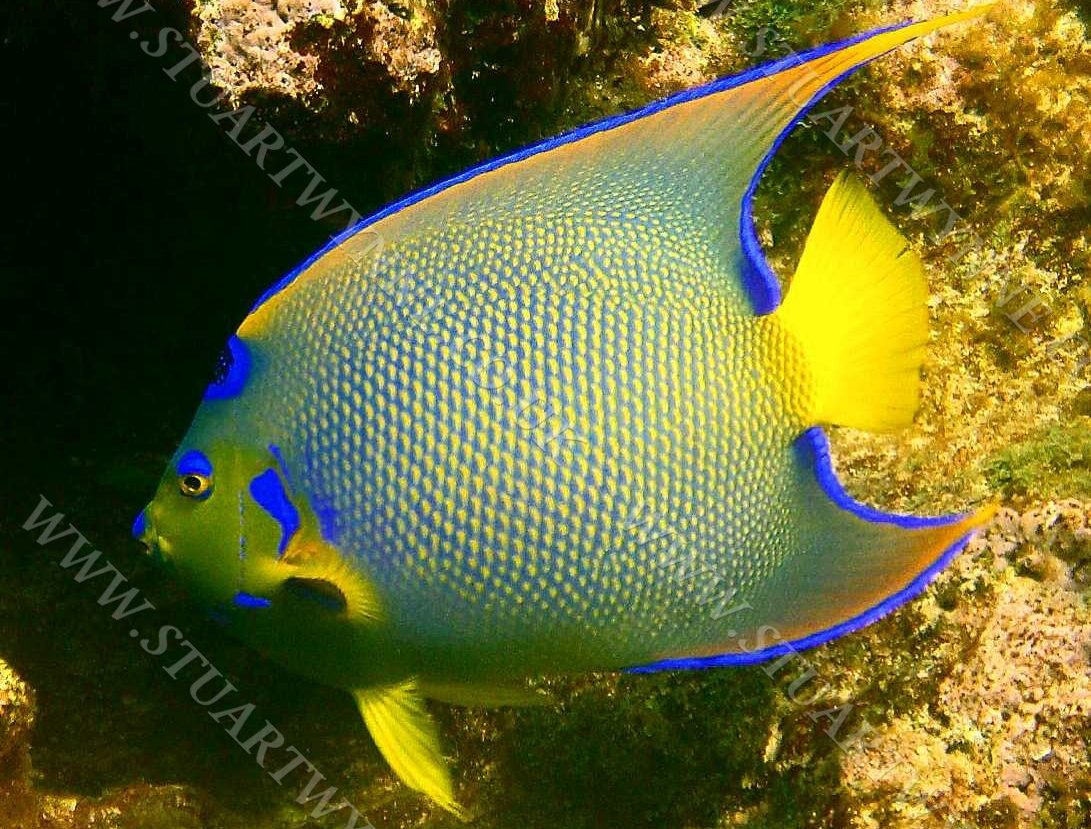 One of the most colourful Caribbean coral reef fish species, and always a pleasure to see when diving, the Queen Angelfish (Holacanthus ciliaris) is unfortunately not as common as it once was in Anguilla, being a relatively easy target for spearfishers and a tasty treat sometimes seen for sale in local supermarkets. This being said, it can still be seen from time to time when diving on the reefs around the island, especially between Limestone Bay and Shoal Bay East, and some of the offshore cays, such as Sandy Island, Dog Island and Prickly Pear.

As with all species of Angelfish (family Pomocanthidae), the Queen Angelfish is often seen swimming around in pairs, perhaps suggesting long-term monogamous bonds. During each spawning cycle, pairs rise up in the water column and release eggs and sperm synchronously as they dance towards the surface. The female releases around 50 thousand eggs during each display, and may total as many as ten million eggs during each season. The eggs are transparent, buoyant, and pelagic, floating in the water column. They hatch after 15 to 20 hours into larvae that grow rapidly for about 3–4 weeks before settling on the bottom at about 15–20 mm in length. Juvenile phases have different colourations to adults, with bright blue body bars that disappear gradually as adulthood approaches. Of particular interest, and probably where the species gets its name, is the bright blue ‘crown’ that can be clearly seen on their ‘forehead’. Queen Angelfish are reported to live for around 15 years, and able to reach almost half a metre in length! Now that would be quite a meal, if only they were ever allowed to reach such a size and age!

Originally posted on Instagram @sea_anguilla with the text: Queen Angelfish taking a turn around The Garden offshore from Limestone Bay. This species is always a pleasure to see as it is one of the most colorful fish in the waters around Anguilla.