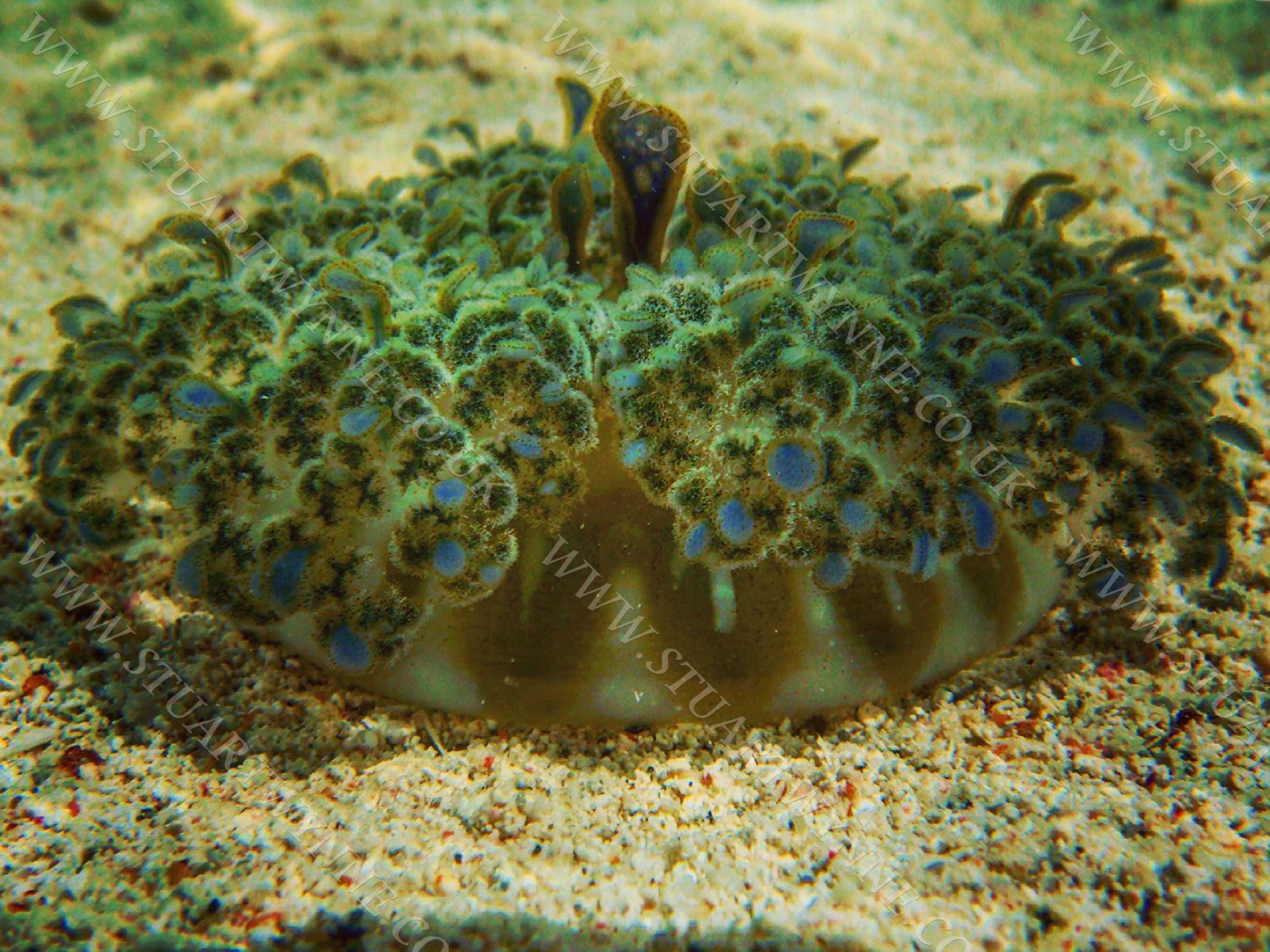 The Upsidedown Jellyfish (Cassiopea frondosa) is a curious member of the jellyfish class (Scyphozoa), spending most of its life living upsidedown, gently pulsating its body to keep itself in contact with the sea bed. There, they lap up the suns rays with which they use to photosynthesis using zooxanthellae; their dinoflagellate partners that live symbiotically in their tissues in the same way as coral species. This makes them an interesting case study as to how their close Cnidarian relatives, the sea anemones, may have became fixed to the substrate with their tentacles aloft. It doesn’t take a huge jump in ones imagination to see how at some point other upsidedown species may have evolved to be permanently fixed to the bottom, with their underside becoming their topside, and the anemones were born. From there, with a bit of calcium deposition, one can then see how solitary corals may have branched off, and on the evolutionary story goes.

With its ability to photosynthesis, the Upsidedown Jellyfish does not need a potent sting to catch prey, but to some it might produce an itchy rash. Certain crab species take advantage of the inverted nature of this stinging species and carry them around on their back for defense purposes. Clever.

In some parts of the Caribbean, this jellyfish species is very common in shallow mangrove areas (or similar), but in Anguilla where this photo was taken, these habitats are limited, so I have only ever seen them in significant numbers in Fish-hole Pond on Scrub Island. This island is a very interesting place to visit, with some fascinating natural areas and scattered abandoned developments. It is a privately owned island however with a slightly troubled past, so get permission before exploring beyond the wonderful beach at Scrub Bay.

Originally posted on Instagram @sea_anguilla with the text:  Upsidedown Jellyfish at Fish Hole Pond on Scrub Island. These interesting creatures are a wonderful example of how sea anemones may have once chosen a solitary existence through evolutionary processes as they lay up-turned on the sea floor pulsating slowly. Amazing creatures that are mostly only found in shallow lagoons and other semi-tidal habitats. Don’t worry, if you step on one by mistake they do not sting, but it may leave the jellyfish squished so it is a good idea to watch where you step if you are wading through these places.